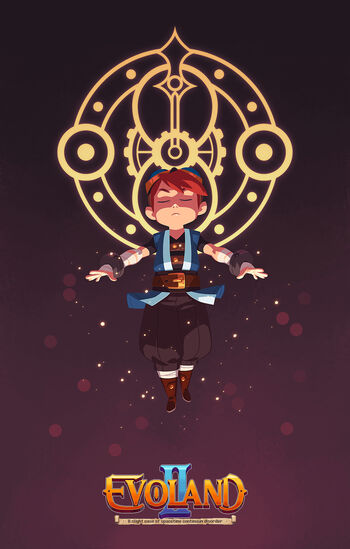 Evoland 2 is the spiritual successor to the original Evoland and with its graphics style changing as you travel through time and its gameplay evolving as you move along the storyline. It is also a much bigger game and a classic RPG at heart, with a complex scenario based on time travel, dozens of characters with their own backgrounds and ambitions and vastly different gameplay styles that are linked to the story and the player's actions. The game comes entirely DRM Free and available for Windows.

Full of humor and references to classic games, the aptly named Evoland 2, A Slight Case of Spacetime Continuum Disorder brings a truly epic and extraordinary adventure, unlike anything you've ever played before!

The story of Evoland 2 will take you through (mainly) 3 different time periods, each with its own historical setting and art style.

The past, which is visually inspired by the good old NES era (with some more modern twists).

The goal for the past was to create an ambivalent world where there is no clear bad or good guys. The story takes place in a war-torn world where every character has his own ambitions and the definition of good or bad is really a question of perspective. You will embark in a series of events related to the war between the Empire and the Demons, that will have a very deep impact on the evolution of the world and the other eras.

These events tell a story that you can piece together in different ways. For example you will be able to witness an event directly in the past or find a record of them in the present or future, and more often than not, doing both will be the only way to have a clear perspective of what is really happening.

The Present era of the world of Evoland 2 the action takes place 50 years after the Past era and everything is much more quiet. In fact, the Empire is celebrating the 50th anniversary of its victory over the Demons and it seems everything is going well in a cheerful and thriving world. But our characters will witness first-hand how history is always written by the victors, and how even the best lies cannot make a dark past go away.

Something happened. Something bad. The future in Evoland 2 is a scary era, with a cataclysm that changed the world, delusional citizens trying to pretend it never happened and new factions vying for power. Changing the course of history seems like the right (and very much heroic) thing to do. But it seems the flow of time itself is not as straightforward as it looks…

Evoland 2 features three difficulty settings available at the start of the game.